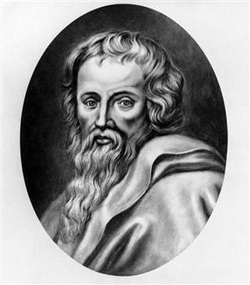 The historic records bearing on St. Paul are fuller than those for any Scriptural saint. We have Paul's own wonderful writings, the fourteen letters included in the New Testament, which outline his missionary journeys, exhort and admonish the various Christian congregations, discuss ethics and doctrinal matters; and in the midst of all this we get a revelation of the man himself, his inner   character, his problems and fears. St. Luke's Acts of the Apostles and certain apocryphal books are other sources of our knowledge of St. Paul. Of all the founders of the Church, Paul was perhaps the most brilliant and many-sided, the broadest in outlook, and therefore the best endowed to carry Christianity to alien lands and peoples.

Born into a well-to-do Jewish family of Tarsus, the son of a Roman citizen, Saul (as we shall call him until after his conversion) was sent to Jerusalem to be trained in the famous rabbinical school headed by Gamaliel. Here, in addition to studying the Law and the Prophets, he learned a trade, as was the custom. Young Saul chose the trade of tentmaking. Although his upbringing was orthodox, while still at home in Tarsus he had come under the liberalizing Hellenic influences which at this time had permeated all levels of urban society in Asia Minor. Thus the Judaic, Roman, and Greek traditions and cultures all had a part in shaping this great Apostle, who was so different in status and temperament from the humble fishermen of Jesus' initial band of disciples. His missionary journeys were to give him the flexibility and the deep sympathy that made him the ideal human instrument for preaching Christ's Gospel of world brotherhood.

In the year 35 Saul appears as a self-righteous young Pharisee, almost fanatically anti-Christian. He believed that the trouble-making new sect should be stamped out, its adherents punished. We are told in Acts vii that he was present, although not a participator in the stoning, when Stephen, the first martyr, met his death. It was very soon afterwards that Paul experienced the revelation which was to transform his life. On the road to the Syrian city of Damascus, where he was going to continue his persecutions against the Christians, he was struck blind. On arriving in Damascus there followed in dramatic sequence his sudden conversion, the cure of his blindness by the disciple Ananias, and his baptism. Paul accepted eagerly the commission to preach the Gospel of Christ, but like many another called to a great task he felt his unworthiness and withdrew from the world to spend three years in "Arabia" in meditation and prayer before beginning his apostolate. From the moment of his return, Paul—for he had now assumed this Roman name—never paused in his labours. It proved to be the most extraordinary career of preaching, writing, and church-founding of which we have record. The extensive travels by land and sea, so replete with adventure, are to be traced by anyone who reads carefully the New Testament  letters. We cannot be sure, however, that the letters and records now extant reveal the full and complete chronicle of Paul's activities. He himself tells us he was stoned, thrice scourged, thrice shipwrecked, endured hunger and thirst, sleepless nights, perils and hardships; besides these physical trials, he suffered many disappointments and almost constant anxieties over the weak and widely-scattered communities of Christians.

Paul began his preaching in Damascus. Here the anger of the orthodox Jews against this renegade was so great that he had to make his escape by having himself let down from the city wall in a basket. Going down to Jerusalem, he was there looked on with suspicion by the Jewish Christians, for they could not at first believe that he who had so lately been their persecutor had turned advocate. Back in his native city of Tarsus once more, he was joined by Barnabas, and together they journeyed to Syrian Antioch, where they were so successful in finding followers that a church, later to become famous in the annals of early Christianity, was founded. It was here that the disciples of Jesus were first given the name of Christians (from the Greek, anointed). After again returning to Jerusalem to bring aid to members of the sect who were suffering from famine, these two missionaries went back to Antioch, then sailed to the island of Cyprus; while there, they converted the Roman proconsul, Sergius Paulus. Once more on the mainland of Asia Minor, they crossed the Taurus Mountains and visited many towns of the interior, particularly those having Jewish settlements. It was Paul's general practice in such places first to visit synagogues and preach to the Jews; if rejected by them, he would then preach to the Gentiles. At Antioch in Pisidia Paul delivered a memorable discourse to the Jews, concluding with these words (Acts xiii,46-47): "It was necessary that the word of God should be spoken to you first, but since you reject it and judge yourselves unworthy of eternal life, behold, we now turn to  the Gentiles. For so the Lord commanded us, I have set thee for a light to the Gentiles, to be a means of salvation to the very ends of the earth." After this, the Jews drove Paul and Barnabas out from their midst, and a little later the missionaries were back in Jerusalem, where the elders were debating the attitude of the Christian Church, still  predominantly Jewish in membership, towards Gentile converts. The question of circumcision proved troublesome, for most Jews thought it important that Gentiles should submit to this requirement of Jewish law; Paul's side, the more liberal, standing against circumcision, won out eventually. 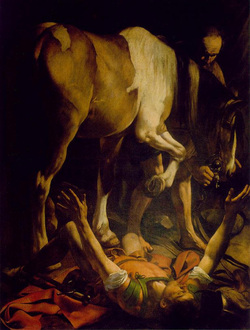 The second missionary journey, which lasted from 49 to 52, took Paul and Silas, his new assistant, to Phrygia and Galatia, to Troas, and across to the mainland of Europe, to Philippi in Macedonia. The physician Luke was now a member of the party, and in the book of Acts he gives us the record. They made their way to Thessalonica, then down to Athens and Corinth. At Athens Paul preached in the Areopagus, and we know that some of the Stoics and Epicureans heard him and debated with him informally, attracted by his vigorous intellect, his magnetic personality, and the ethical teachings which, in many respects, were not unlike their own. Passing over to Corinth, he found himself in the very heart of the Graeco-Roman world, and his letters ofthis period show that he is aware of the great odds against him, of the ceaseless struggle to be waged in overcoming pagan scepticism and indifference. He nevertheless stayed at Corinth for eighteen months, and met with considerable success. Two valuable workers there, Aquila and Priscilla, husband and wife, returned with him to Asia. It was during his first winter at Corinth that Paul wrote the earliest extant  missionary letters. They show his supreme concern for conduct and his belief in the indwelling of the Holy Spirit which gives men power for good.

The third missionary journey covered the period of 52 to 56. At Ephesus, an important city of Lydia, where the cult of the Greek-Ionic goddess Diana was very popular, Paul raised a disturbance against the cult and the trade in silver images of  the goddess which flourished there. Later, in Jerusalem, he caused a commotion by visiting the temple; he was arrested, roughly handled, and bound with chains; but when he was brought before the tribune, he defended himself in a way that impressed his captors. He was taken to Caesarea, for it was rumoured that some Jews at Jerusalem, who falsely accused him of having admitted Gentiles to the temple, were plotting to kill him. He was kept in prison at Caesarea awaiting trial for about two years, under the proconsuls Felix and Festus. The Roman governors apparently wished to avoid trouble with both

Jews and Christians and so postponed judgment from month to month. Paul at last appealed to the Emperor, demanding the legal right of a Roman citizen to have his case heard by Nero himself. He was placed in the custody of a centurion, who took him to Rome. The Acts of the Apostles leave him in them imperial city, awaiting his hearing.

It would appear that Paul's appeal was successful, for there is some evidence of another missionary journey, probably to Macedonia. On this last visit to the various Christian communities, it is believed that he appointed Titus bishop in Crete and Timothy at Ephesus. Returning to Rome, he was once more arrested, and after two years in chains suffered martyrdom, presumably at about the same time as the Apostle Peter, bishop of the Roman Church. Inscriptions of the second and third century in the catacombs give evidence of a cult of SS. Peter and Paul. This devotion has never diminished in popularity. In Christian art St. Paul is usually depicted as a bald man with a black beard, rather stocky, but vigorous and intense. His relics are   venerated in the basilica of St. Paul and in the Lateran Church at Rome.

Because of the pressure of his work, Paul usually dictated his letters, writing the salutation in his own hand. The most quoted of New Testament writers, Paul has given us a wealth of counsel, aphorisms, and ethical teachings; he had the power of expressing spiritual truths in the simplest of words, and this, rather than the building up of a systematic theology, was his contribution to the early Church. A man of action, Paul reveals the dynamic of his whole career when he writes, "I press on towards the goal, to the prize of God's heavenly calling in Christ Jesus." Although he himself was forever pressing onwards, his letters often invoked a spirit of quiet meditation, as when he ends his epistle to the Philippians with the beautiful lines: "Whatever things are true, whatever honorable, whatever just, whatever holy, whatever lovable, whatever of good repute, if there be any virtue, if   anything worthy of praise, think upon these things."
Powered by