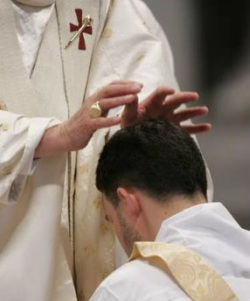 Vocations to the Priesthood or Permanent Diaconate in Scotland

Information about vocations to the priesthood can be found here

Information about vocations to the permanent Diaconate can be found here


Scotland needs a conversation about priesthood. We need to be openly supportive of our priests and encouraging of those who may consider becoming priests.

This is the conviction behind much of the work currently being undertaken by Priests for Scotland. Priests for Scotland is an initiative of the Bishops' Conference of Scotland which has as its goal the promotion of the culture of priestly service in Scotland. Over the last years that work has focused on preparing materials for the promotion of vocations to the priesthood in Scotland.

In recent years the profile of likely candidates for seminary has changed significantly and is much more varied than before. While twenty years ago the likely candidate for seminary was just finishing secondary school, today it is much more difficult to describe the "likely candidate". Some still come from secondary school having heard the Lord's call in their family, school or parish. Others enquire because they are searching for a more fulfilling way to spend their lives. They have been to university, they have finished apprenticeships, they have worked in a variety of different occupations and none of these have left them with the satisfaction that they thought they would have found. Both groups want to make a difference with their lives and they feel that God may be calling them to consider service as a priest. Many of those who come forward speak of a seed that was planted sometimes as early as primary school. Almost all of those who come forward have found their way thanks to someone inviting them to consider serving as a priest, even if that message was delivered ten, twenty or more years ago.

This is a challenge for priests and for the wider community to consider anew the way that priesthood is presented and encouraged. For too long we have been quick with statistics that apparently prove that there is a crisis in vocations to the priesthood. But no one ever became a priest because they were convinced by statistics. These statistics are themselves questionable in the degree to which they present an apparent problem since they do not take into account the sharp fall in the population itself.


Priests for Scotland is also concerned with supporting priests already engaged in ministry in Scotland offering these priests resources and opportunities to continue the process of formation. To minister today as a priest in Scotland is to minister at a challenging time and in a rapidly changing world. If you would like more information about priesthood in Scotland please contact Fr. Andrew McKenzie, Priests for Scotland, 89 Abercromby Street, Glasgow, G40 2SA or explore this website further. Click here
Powered by